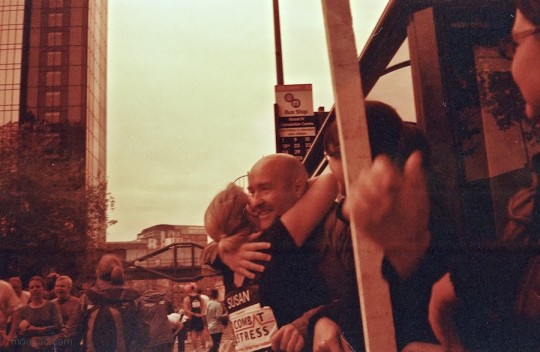 On 23 Oct. 2011 I passed by Broad Street in Birmingham on my way to Tesco’s and it happened that I was carrying my Ricoh 500 RF with Redscale Lomography film inside it. Right there I found a large crowd cheering for the runners of Bupa Great Birmingham Run, AKA Birmingham Half Marathon (OK that’s not entirely true since I saw the gathering from my window before going out, and I got a letter from the City Council about the road closures).

Since I’m not into marathons, or any kind of organised sports
for that matter, I was not interested in the race itself as much as I was interested in the human factor represented by the crowd and the runners themselves. Therefore I don’t know who won or in what time they finished, all I saw were the faces of the people and the expressions they made, and that was what I tried to reflect in this photo set.